The Invasion of “Teksty”

Teksty Drugie is a continuation of the bimonthly Teksty, a joint initiative of the Institute of Literary Research and the Committee of Literary Scholarship, both at the Polish Academy of Sciences. Teksty appeared between 1972 and 1981. Its publication was suspended during Martial Law and was never reinstated. Throughout its existence, Teksty struggled with censorship and was impeded by the Academy’s political institutions; for instance, the journal’s animating spirit, Janusz Sławiński, was prevented from assuming the role of editor-in-chief until issue 3 of 1981. From the beginning, Teksty developed an individual character, taking shape through the close interaction between its first four editors, Edward Balcerzan, Jan Błoński, Janusz Sławiński, and Stefan Treugutt (cf. Janusz Sławiński, ‘Historia Tekstów (krótki kurs). Odcinek pierwszy’, in Teksty 6 (1981)).
Teksty was distinguished by its open approach to structuralist thought. From the outset it guarded a critical distance both to the prescribed academic discourse (jargon?) and to dominant trends in literary research. The editors’ (often ironic) comments would adorn the margins of published articles – an attitude that resulted in a specific brand of methodological eclecticism. Despite the domination of structuralist approaches,  Teksty was always open to alternative currents (such as reception theory, hermeneutics, or the works of Bakhtin and Derrida), as well as to methodological innovations. The journal ‘urged [contributors] to try everything possible, without, however, identifying with any one trend’ (Janusz Sławiński, Teksty Drugie
, 1 (1990), p. 151).

However, Teksty Drugie is not merely a continuation of a journal that had ceased to operate. It came into being in an entirely different historical moment than its predecessor, and it responded to a different set of realities. Its title – whose invention is attributed to Aleksandra Okopień-Sławińska – is a reference to secondary literature; it connotes at once the continuation of Teksty and a certain transformation – ‘Drugie’ in Polish means ‘Second’. This ambivalence pervades the journal: from among the editorial board of Teksty only Edward Balcerzan remained in Teksty Drugie, and yet most of the new editors had already collaborated with the earlier publication; the graphic layout of Teksty Drugie, though changed, harked back to that of Teksty; the numeration of Teksty Drugie begins with number 1, but on the second page a note stated that the journal is a continuation of Teksty. Moreover, the editorial office remained the same – the legendary room 128 at the Institute of Literary Research, a place where literary theorists would get together; yet, after 1990 even this room would change its specificity (cf. Jerzy Jarzębski, ‘Pokój 128’, in Res Publica, 1990 no. 12). And let us not pass over a certain playfulness: the first issue of both Teksty and Teksty Drugie concludes with an article by Andrzej Dobosz in the Autobiography section.
In the first issue of Teksty Drugie the editors confront the legend of Teksty and clearly position the new journal in relation to its predecessor. Their assumption is that continuity can be found in a varied discussion of contemporary humanities. And yet, any kind of straightforward continuation is made impossible by three factors: first, the political transformation and changes in public discourse lead inexorably to a change in the journal’s philosophy: Teksty had been forced to resort to what Janusz Sławiński described as ‘cunning intrepidity, perfidy, spurious themes and allusiveness’ (ibid.). This formula was now obsolete. Second, post-transformation literature demanded a new survey of contemporary trends, inviting researchers to rethink the literary canon (see Jerzy Jarzębski, ‘Apetyt na Przemianę’, in Teksty Drugie, 3 (1990)). Finally, both literary scholarship and the humanities at large underwent a process of change. There wasn’t anymore a unified language in the discipline; the discipline rather began to sinks into methodological chaos (see Edward Balcerzan, ‘Zmiana stanu’, in Teksty Drugie, 2 (1990)). Janusz Sławiński hit the nail on the head: ‘It is impossible now to play – as it was in the case of the old Teksty – at deconstructing paradigms, when our greatest problem is the very absence of any paradigm’ (Teksty Drugie, 1 (1990), p. 152). As system of thought that relied on simple dichotomies went bankrupt, ambiguity and internal differentiation come to be recognized as the essence of contemporary experience (Ryszard Nycz, ‘Jakoś inaczej’, in Teksty Drugie, 1 (1990).

The principle of openness

Responding to these observations, the editor-in-chief, Ryszard Nycz, presents, though tentatively, what would become the journal’s outlook. In his introduction to the first issue of Teksty Drugie he writes: [it is] ‘somehow different – that is all we can say right now, since there is no definite consent about the nature of difference itself (Ryszard Nycz, Teksty Drugie, 1 (1990), p. 2). That ‘temporary’ impossibility of defining the difference, however, turned out to be a permanent state. As a result, the guiding principle of openness would become the journal’s main characteristic. Teksty Drugie reflects changes in literature, literary scholarship and the humanities, testifying to their diversity. Its philosophy of openness is evident in the absence of any dominating paradigm or methodology, as well as in its recognition of the varied and changing nature of any theoretical outlook or system of knowledge.

In the first years of its existence, the editorial board of Teksty Drugie attempted to respond to cultural transformations and that affected the discipline. They created an inventory of themes that had been neglected until then – Polish literature in the People’s Republic (1990 no. 1), exile literature (1991 no. 1/2), politics and literature (1990 no. 4; 1991 no. 6), or post-structuralism (1990 no. 2).

The key problems discussed in Teksty Drugie changed with time. As early as 1994 (no. 1), Anna Nasiłowska pointed out that ‘something has changed’ – the cultural situation had stabilized somewhat, and Teksty Drugie, having caught up with itself, gradually began to concentrate on presenting current debates in contemporary humanities (such as the iconic turn, cultural anthropology, questions of subjectivity, identity, or experience), assuming an active role in these debates. Through the years, Teksty Drugie evolved away from Teksty and consolidated its independent position. In 1998, this process acquired a symbolic dimension when the editorial office moved to room number 1 at the Institute of Literary Research; the graphic layout was radically modified in 1999. The journal’s philosophy, however, did not undergo any more significant changes. The guiding principles of openness, of presenting various analytic approaches, still remains the main characteristic of Teksty Drugie, whose very form embodies its values: most of the journal’s sections appear irregularly, some are rather ephemeral, depending on the themes that are presented. The content determines the form, and not vice versa.

The specialty of Teksty Drugie is to publish monographic issues dedicated to one single theme. These themes need not belong to the area of ‘literary theory, criticism, and interpretation’ – they often touch on current problems in the humanities at large. Monographic issues present debates in their wider contexts, and bring together research from related disciplines (such as philology, anthropology, philosophy, or art history).

The principle of openness at Teksty Drugie concerns not only its themes and form, but also the contributors. Professors, independent researchers, doctoral students and even masters students publish on the same terms. From the outset, the journal was a platform for different literary scholarly specializations and other disciplines. This is best seen in the constitution of the editorial board and its associates.

The Editorial Board since 1990 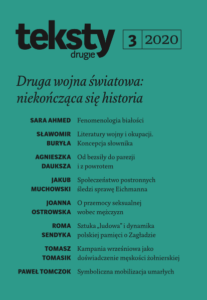